Before we left Cape Breton Island for PEI,  we made a quick trip down to the docks in Louisburg and walked the decks of the Bluenose II. The original Bluenose has an interesting history. It was launched in 1921 in Lunenburg, Nova Scotia.  It was originally a fishing boat and also used for racing in fishermen’s’ sailing races.  The captain of this schooner had a competitive spirit and won many international races.    In 1946, the vessel hit a reef and the Bluenose 1 was lost.  In 1963. the pride for the original Bluenose propelled the original shipyard to build Bluenose II.  It now sails around the Maritimes and beyond serving as an ambassador and educating people on Nova Scotia’s sailing and racing history.

The boat was incredibly beautiful and well kept.  A work of art. 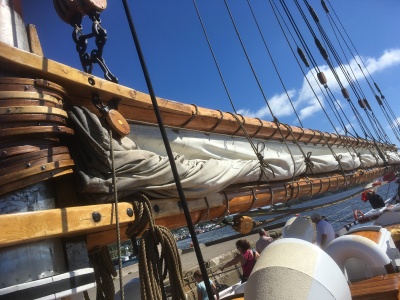 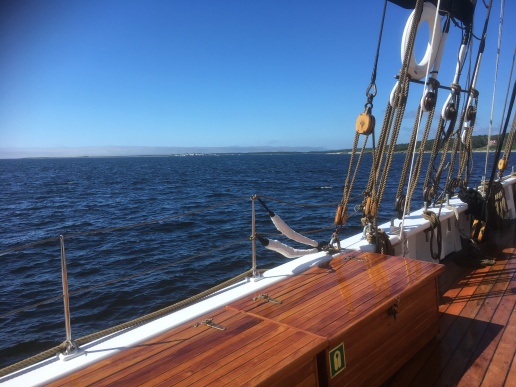 After seeing the Bluenose II, we pointed ourselves in the direction of the PEI ferry that leaves Nova Scotia at Caribou. We had a quick picnic before we got on the ferry. During the ride over, we were entertained by an talented twin sister duo Ava and Lily Rashed.  With lovely, strong voices and great musicianship, I’m sure that won’t be the last time we here of these two. 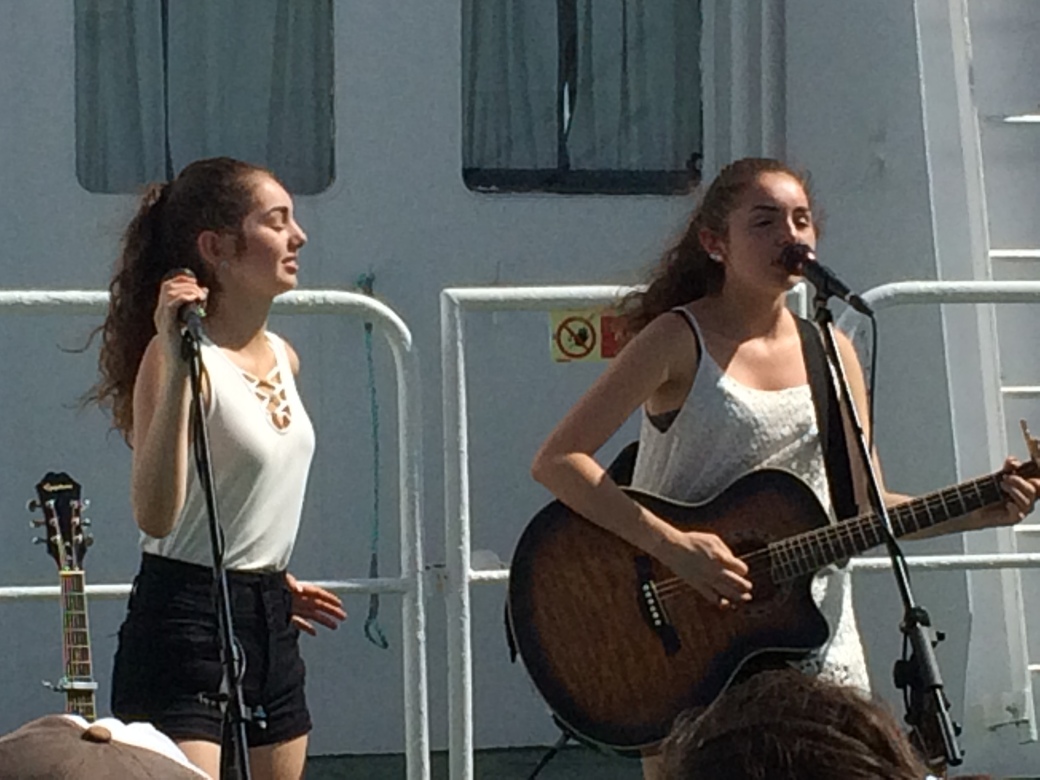 We finally arrived at Greens Roofs Cottage in Mt. Stewart just east of Charlottetown. It was lovely to have a break from the camper. But boy was that old house hot inside. Thankfully here was a screened porch with a big dining table.  We were able to have all our meals out there and Guy could paint happily without being massacred by the mosquitos. Even so, the mosquitos and the no see ems got in somehow.  They were ruthless. 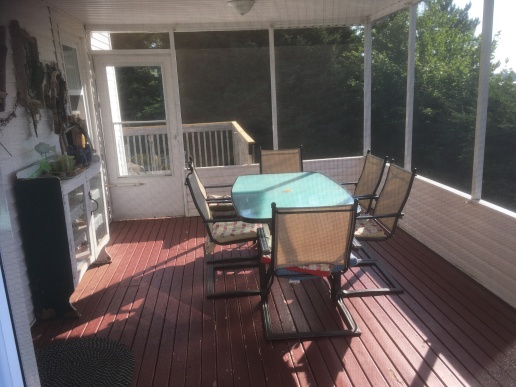 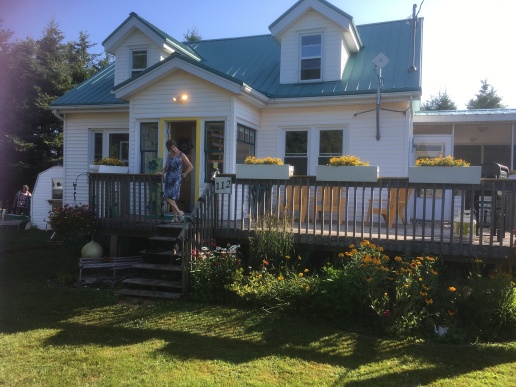 In the morning, Brenden, Phil and I had a bike ride along the red roads near the Cottage. PEI is known for its clay roads which are full of iron oxide. 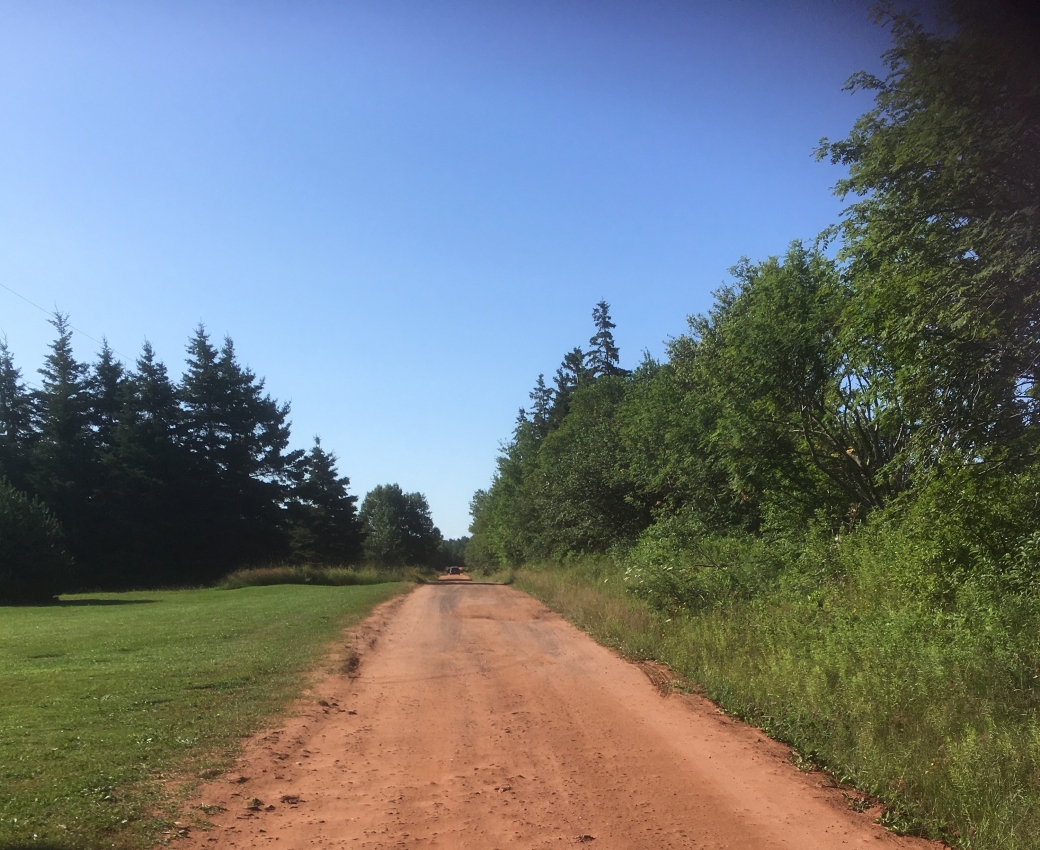 Shortly after getting back, the rains came on intensely and they stayed for most of the day. Brenden, Guy and I took it easy until early afternoon. Guy painted, and I did some writing and caught up on our laundry. Then we met Heather in Charlottetown and had a walk around downtown and a cup of tea.

Unfortunately Guy’s sister Caroline had to go to emergency that day. She hadn’t been feeling well for some time and things progressed so that she needed to see a doctor on PEI.   It turned out she had pneumonia. She stayed in the hospital all day and was given antibiotics. We were all happy to see her at the musical that night, “Anne and Gilbert”.

The musical was based on Anne of Green Gables and the time from when Anne goes off to college to become a teacher, to the time she and Gilbert finally mend fences and become a couple. It was a touching look at love, sacrifice and forgiveness with excellent singing and dancing. There were a couple of times where I could bet there wasn’t a totally dry eye in the audience, myself included. It was very well done.

Guess we hadn’t had enough Anne yet. We visited all things Anne this day. First, we started at Green Gables, the house near where Lucy Maude Montgomery grew up that inspired the Anne books. We walked through Green Gables, then walked the Haunted Woods.  Then we had a picnic and finished off with a walk down Lovers’ Lane. Even though it was all quite touristy, we had a lot of fun. 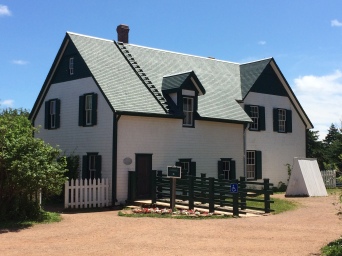 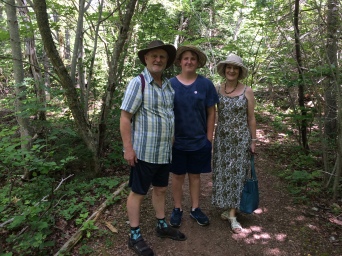 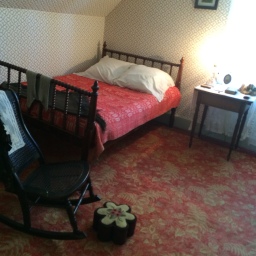 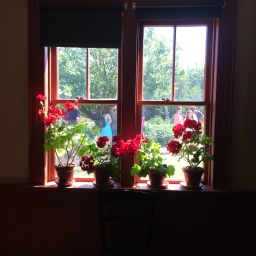 We topped off the day with a terrific swim at Cavendish Beach.  It is a very popular beach near all the Anne of Green Gables tourist attractions.  PEI has the most wonderful beaches with incredible sand dunes everywhere that they are working to protect.   It’s great if you have little kids because there are so many sandbars and the bottom is sandy.  It is hard though to get a swim in any deep water. 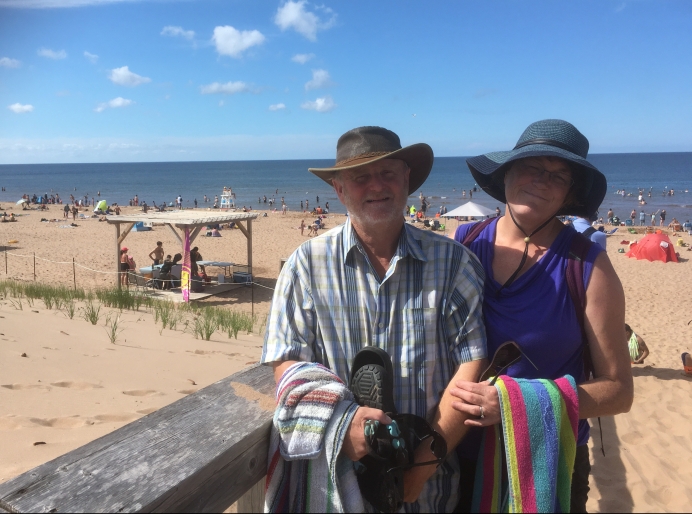 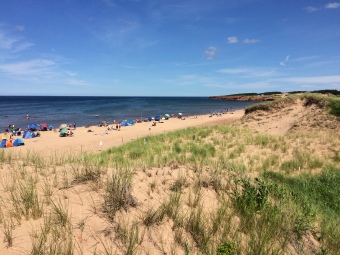 We journeyed out to Basin Provincial Park on the most northeastern tip of Prince Edward Island.  We had a great day swimming in the Gulf of St. Lawrence.  Then we had a potluck picnic followed by a visit to the Lighthouse.  We have seen so many lighthouses. 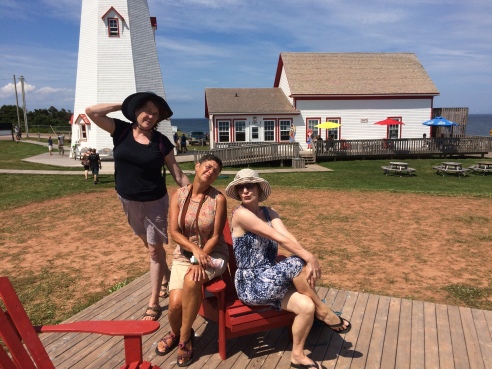 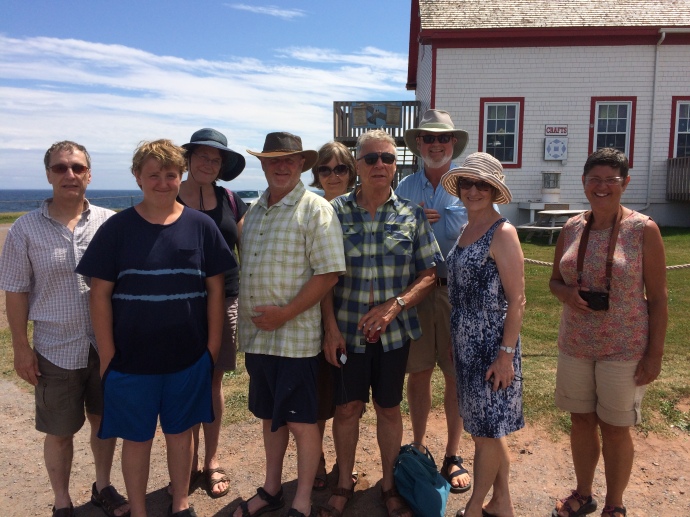 In the later afternoon, Guy, Brenden and I went for another swim at Blooming Pt. Rd. Beach near where we were staying.  What a gem of a beach.  It was like the other wonderful beaches but without all the crowds.  It was glorious and the water was so warm.  We enjoyed it so much, we were almost late for dinner. 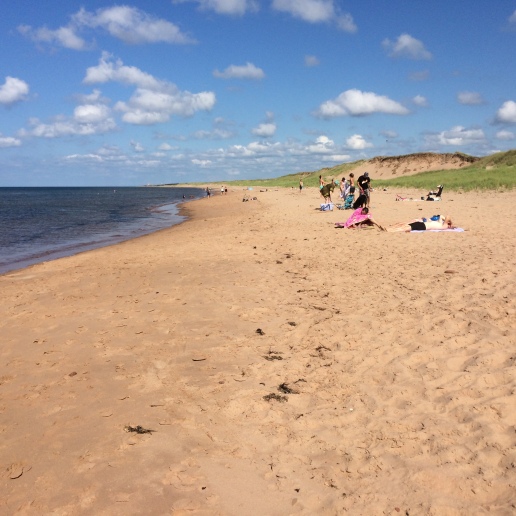 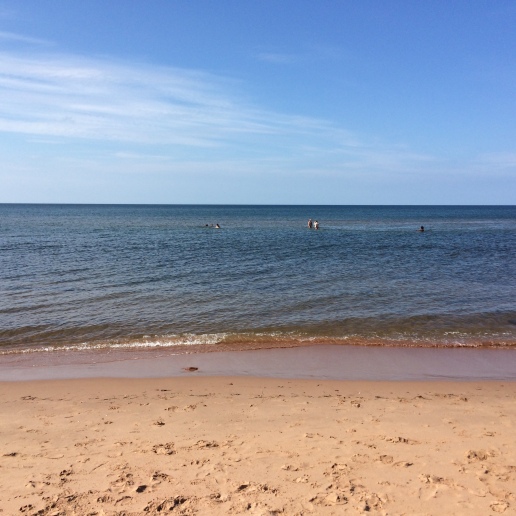 This was our final full day before leaving the island.  It was time to learn a little bit about Confederation since Charlottetown was the place where the original talks regarding Confederation, referred to as the Charlottetown Conference,  occurred for a week in 1864. We went downtown and saw a very informative film that covered the history of Confederation.  Then we had lunch out and then walk around the old town and down to the water where there was lots of information along the way on the history of the harbor.  In the afternoon we went to a Ceilidh at a local pub.  We ordered some pints and spent a couple of hours listening to the fine traditional music of some local artists.  It was a blast. 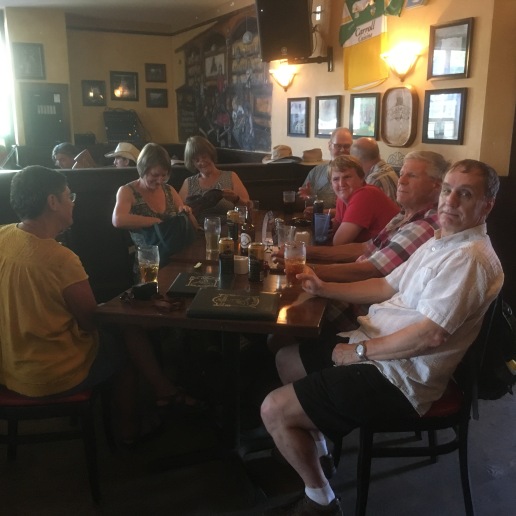 July 30, 2018 – Prince Edward Island back to Halifax, Nova Scotia
We lollygagged our way off of the Island that day. We really didn’t want to leave after such a great few days with everyone including great swimming. We were up early to pack up and then tidy the B and B. Then Guy, Brenden and I headed to the South Shore of PEI to Argyle Provincial Park, positioning ourselves for the trip over the Confederation Bridge later.  The rest of the group headed back into Charlottetown for some more sightseeing and to pick up some PEI swag. They would meet us later. By 10 am, the 3 of us were bobbing around in Northumberland Strait. It was a very picturesque spot with the dramatic red cliffs, red sand and even reddish tinted ocean.  I noticed that it seemed easier to float in this water.  Maybe it was something in the water or maybe just something in my imagination.   The rest of the gang joined us later for a swim and a picnic. 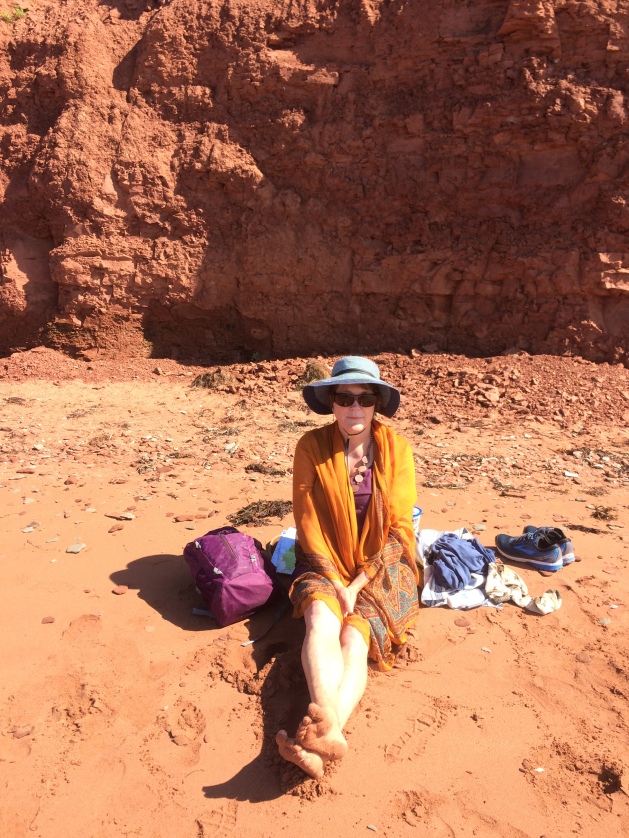 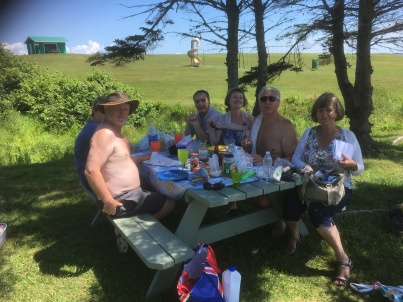 Afterwards, we headed over the Confederation Bridge and bid PEI adieu.  It was exciting to go over this 12.9 mile “feat of engineering”.  It takes about 12 minutes to cross the tolled bridge depending on weather conditions.  The period of construction of the bridge was from October 1993 to May 1997, at a cost of  1.3 billion dollars.  The bridge is curved and is 40 metres (131 ft) above water except for a 60 m (197 ft) navigation span for ship traffic (Wikipedia). 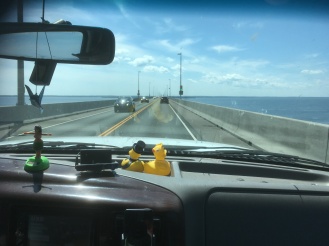 Some feel the bridge has affected the slower pace way of life. But, apparently, it has also helped the economy on PEI. They are selling more potatoes!!! Seems change is inevitable, for better or for worse……………..

And what about the abundance on PEI of those gems of goodness that we all so love. The iron in the soil that gives it its color is great to grow potatoes in and “….it retains just the right amount of moisture during the growing season but is then effectively cleansed over the winter. Warm summers, cold winters and adequate annual rainfall result in excellent growing conditions with the right balance of heat, light, and water to maximize yields and tuber quality. Additionally, being an island provides a distinct advantage to PEI when it comes to growing potatoes. The ocean acts as a natural barrier against airborne or insect-borne diseases. As well, this easy access to the ocean facilitates transportation of the crop, while limited points of entry allow us to control the movement of potatoes into and out of the province. Island growers also practice environmentally sustainable farming practices and follow the most stringent environmental standards in Canada” (Wikipedia). Just a little tater info for you readers.

We topped off the afternoon with a visit to an old French Fort just over the border from New Brunswick into Nova Scotia and then we all had dinner together in Truro.

We went back to Schubie Campground in Dartmouth for another night with Brenden.  The rest of the gang went and booked into their respective B and B’s for the night near the airport. They were all leaving the next day after spending 2 weeks with us in Nova Scotia and PEI.

Back at the campsite, we set up camp, lit a fire, roasted some marshmallows and had a few s’mores and a cup of tea. It was good to just sit around and talk and be together in the quiet of the evening of our last night together.

2 thoughts on “The Land of Anne and Sand, Prince Edward Island”