Guy and I decided to lie low on Monday after our wonderful Canada Day in the city.  Another very hot day was predicted and we just couldn’t face the long walk to the bus stop and hanging out downtown in the heat again.  So we stayed at the campsite.  Guy of course painted and I did laundry and worked on the blog.

So we rode the heat out under the trees in our campsite. We were having truck problems again. This time the starter was beginning to go and Guy thought it best that we get it fixed before we carry on with the trip. We had to wait until Tuesday.

Tuesday July 3 – Ottawa Cousins – we spent the day with cousin Nelson and his wife Karen.  They kindly picked us up at the campsite in their air conditioned vehicle for a day out.  We started off with coffee and chatting at a coffee shop over town. Guy and Nelson really hit it off. They are both interested in painting and art It was nice to get to know Nelson better as we didn’t see him much growing up. He’s actually my mom’s cousin.  My great grandmother Campbell had 10 kids.  His mom Jean and my mom’s mom Vel were sisters.  Everyone from my grandmothers generation is gone now except for the youngest sister Anna.

Karen and Nelsons’ plan was to give us a tour around the Governor General’s neighborhood including her house and gardens and then get on to the Musee de Civilzation but we run out of time for the museum.  The photos below are outside the Governor General’s residence.   The middle photo on the right in the group below is the room that you see used for swearing in ceremonies and Canadian citizenship ceremonies that are often on the news.  That was cool to see.  And the pink room is the reception room that is decked out for ceremonies with food and beverage and a place for people to mingle.  I love that room.  It is so French!!!  But back in the early days, the pink stripe walls used to be draperies and would be rolled up when functions were not on and the room would be made into a tennis court. 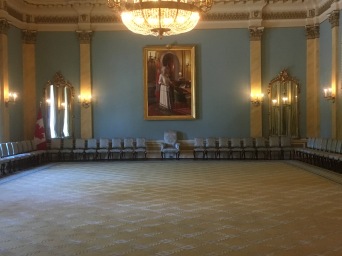 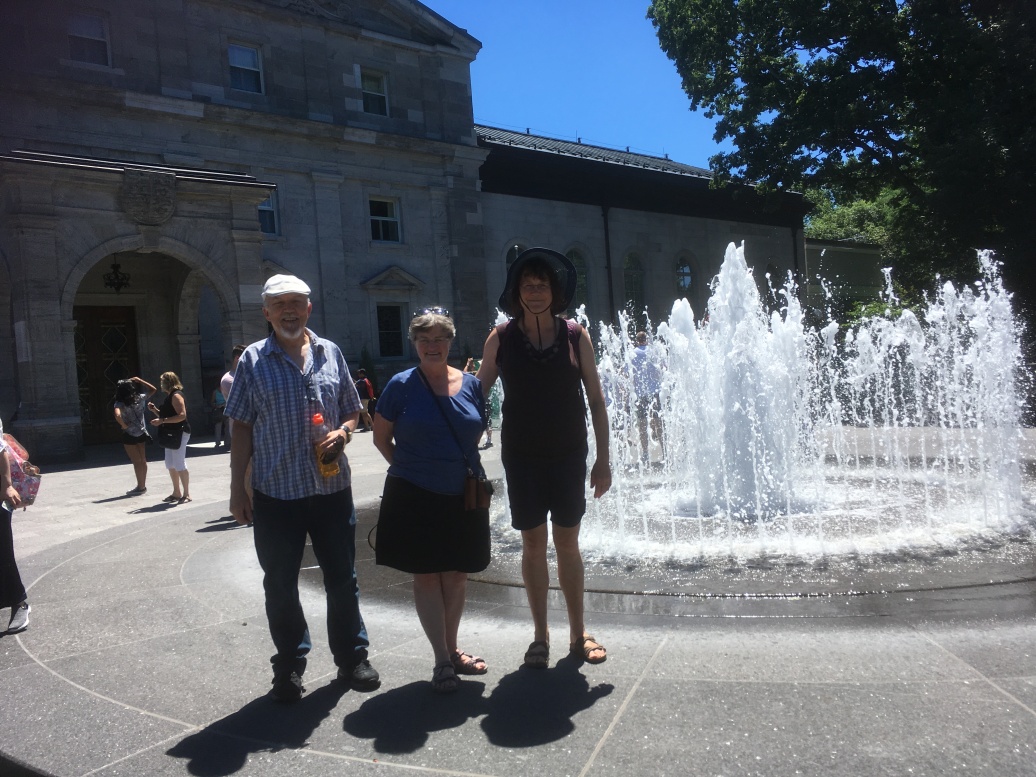 Afterwards we went for lunch on the Ottawa River.  They took us to the part of the River that freezes over in the winter and where people skate.  It would sure be nice to come back in the winter and skate on the canal.

Then Nelson and Karen drove us back to our campsite to pick up our truck.  Thankfully it started.  They followed us to the dealership where the starter was fixed.  After saying goodbye to our wonderful hosts, we went to my other cousin Renee’s place.  She took us for a swim at her in-laws pool.  It was a welcome treat and great to cool off before bed.  Such hospitality from the family meant a lot to us.  I was so happy to have spent time with Renee and Scott and Nelson and Karen.  It was great to meet Scott’s parents too and see two of Renee and Scotts’ boys, or should I say men,  Cody and Tristan.  If we go by Ottawa on our way home, we can see their middle boy Jaiden.

This day we took the rode less travelled from Ottawa to Montreal.  Google maps wanted us on the Trans Canada badly.  We had to fight her the whole way to stay on highway 132, a lesser sometimes 2 lane highway.  Thanks to the direction of our saavy travel companion Bill, our goal was to stay on 132.  We wanted to avoid the vortex of downtown Montreal and come into Longuille where our campsite was on the south side of the St. Lawrence relatively unscathed.  We  were able to pull it off with only a few glitches that left us going off in the wrong direction.  We have learned in these instances to just stay calm, pull over, reroute google maps and carry on.    Driving in Montreal or anywhere in cities in this region is not for the faint of heart at the best of times.

We had a campsite just off highway 132 at Longeuille for 3 nights.  It was a private campsite right on the St. Lawrence but it was a little noisy and it lacked trees too which would have been welcome in the heatwave.

Once we had our campsite organized, we headed into Montreal for a few hours.  There was a little walk on ferry near the campsite that was very handy for the few days we were in Montreal.  It meant we could go back and forth each day without the truck and without the traffic hassles. 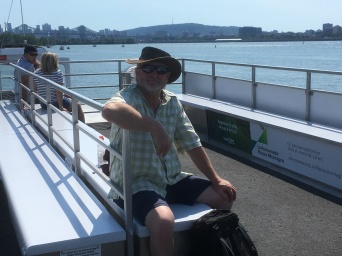 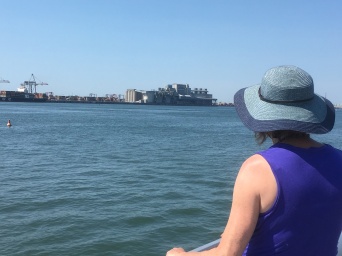 We explored Old Montreal for awhile and then had a wonderful dinner in a sweet little café. 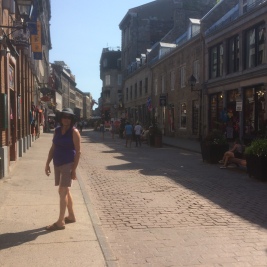 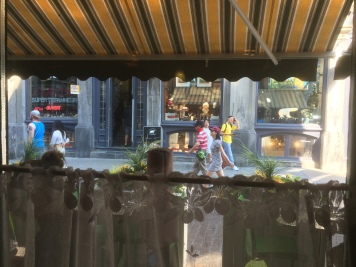 Guy had chicken crepes and I had Caesar Salad.  We enjoyed chocolate crepes and coffee for desert.  Stuffed and happy, we made our way back through Old Montreal to the dock and got our little ferry back to the campsite.  It was nice to cool off somewhat on the deck of the boat and see the sites of the harbor in the evening.

Thursday July 5th – Montreal – This was the hottest day I personally have ever experienced in my life.  We were hot and sweating, dripping really , before we even moved.  I prepared a bunch of bottles of Gatorade and water so we would have plenty to drink.   We went into the city with Bill and Joka on the ferry.

The plan was to take the taxi to the Museum of Fine Arts.   Bill hailed a cab and we got in.  It had air conditioning but it wasn’t working well and it was stuffy and I felt overheated and couldn’t breath and thought I would have to bolt from the taxi.  It was an very uncomfortable 15 minutes.  The others were not affected and I’m sure wondered about me.  Guy pointed out that I was in the sunshine in the cab and it was intense.  It took me an hour at the fine arts museum to recover. When we left the doors of  the museum, we were all whammed with a thick wall of heat.  It was absolutely intense.   It was apparently  45 with the humidity.  I wondered if we could even walk a few blocks down the street to a place for lunch safely.  I kept gasping for a fresh breath of air but all you got was intense heat going into your lungs.   After lunch,  Bill and Joka headed back to the campsite.  I told Guy I’d rather walk in the intense heat than be stuck in an idling taxi in traffic on such a hot day. So we walked slowly, very slowly,  on the shady side of the streets of Montreal  all the way back to Old Montreal and got the ferry.    That night there was a big wind and rainstorm and the heat wave was broken.

Friday July 6th – Montreal –   Since it was a more temperate day, and my heel had fully healed from the rubber boots in the grasslands incident, I decided to take a good 4 mile  power walk up the St. Lawrence bicycle path.  While I was gone, Guy worked on a painting.  Then we got the 11:30am ferry to Montreal and traipsed around for the day, just the two of us.  We hoofed it up St. Laurent to Place de St. Louis and I showed him where I stayed 12 years ago on my way back from Nova Scotia on the train.

Then we went back to St. Laurent and had Lebanese food, falafels and chicken shawarma. Then we meandered through the neighborhoods of colorful old row houses and parks, and then up through McGill Campus and on to Mount Royal. 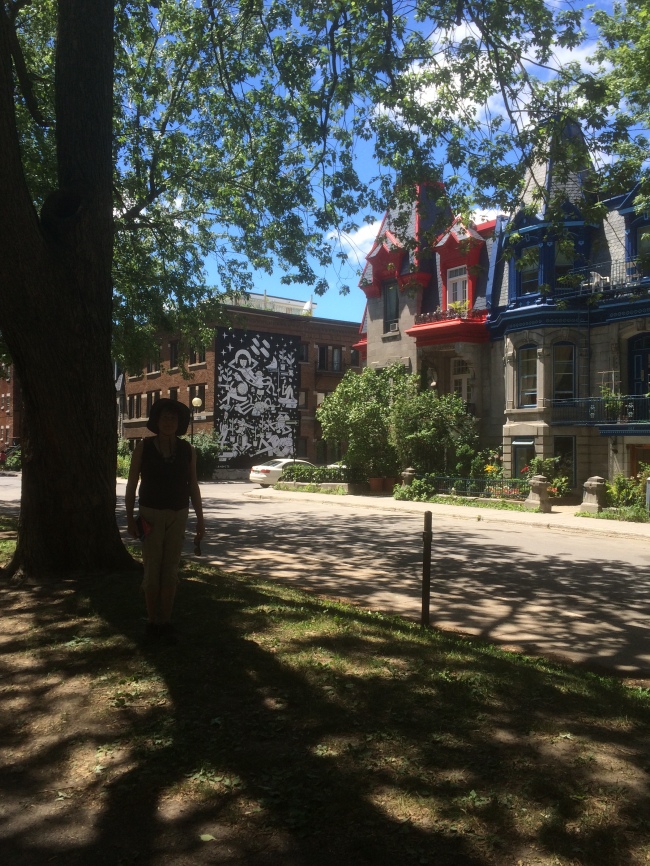 When we came down from Mount Royal, we were way off course and ended up in a totally different area from where we intended.  We had to take a bus back to the neighborhood we came to the mountain from.  We hightailed it back to the old town and had a lovely boat ride back to the campsite. 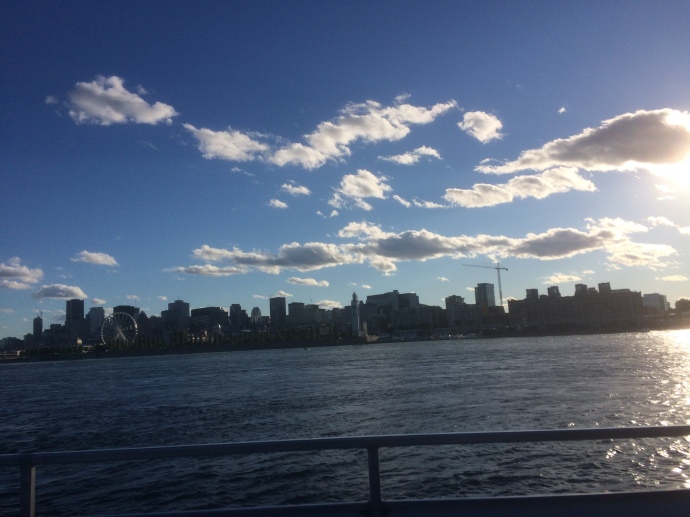 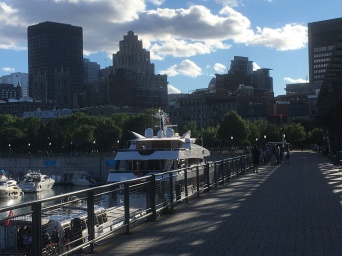