We are still pushing ahead with the mileage since we have to be in Halifax on July 17th to meet family joining us for a couple of weeks.  We have a lot to see and do before then.  The saving grace is having breaks along the way and arriving at these gorgeous campsites at a reasonable hour to enjoy them and have a walk or time to paint or read, or write.

Today marks the end of our third week away.  We hope this installment finds everyone doing well and enjoying the summer weather.

I’ll do a brief catch up with some photos.  Here is the latest news.

Monday June 18 – Grasslands National Park, Saskatchewan to Moose Mountain, Saskatchewan
We made an early start and said goodbye, with a little sadness, to Grasslands National Park. It truly was a once and a lifetime experience and I wondered if I would ever return in my lifetime. What a wonderful thing it is to know that there are folks out there working to keep some part of the earth as it should be.

Instead of Highway 1, we were advised by a very friendly gas station owner in the small town of Cadillac, Saskatchewan to stay off Highway 1 and take Highway 13 across. He said it would save time and it would be a nicer route and take us all the way through to Winnipeg. We heeded his advice and had a big driving day all the way to southeastern Saskatchewan through very typical Saskatchewan countryside and farm towns. We saw a few antelope on the side of the road but I was too late for a picture.

We ended up at a campsite in the south-east corner of Saskatchewan called Moose Mountain. Guy started his new painting that evening, “Prairie Dog”,  inspired at Grasslands National Park. We ate and showered and had an early night. We managed to get a total of 5 ticks at Moose Mountain.  Only one adhered to Guy and had to be taken out with the tick implement. We are in tick country, likely all the way to east coast so we have to be vigilant from now on.

Tuesday June 19th-Moose Mountain, Saskatchewan to Whiteshell Provincial Park, Manitoba
We got on Highway 1 and went through Brandon and on past Winnipeg.  I put on the Guess Who to honor Winnipeg and the band. We will try to stop there on our way back. We noticed the greening of the landscape the farther east we went. Manitoba looks more like B.C. the closer we got to Ontario, but of course the trees are different and smaller.  The landscape looked a bit more like home. 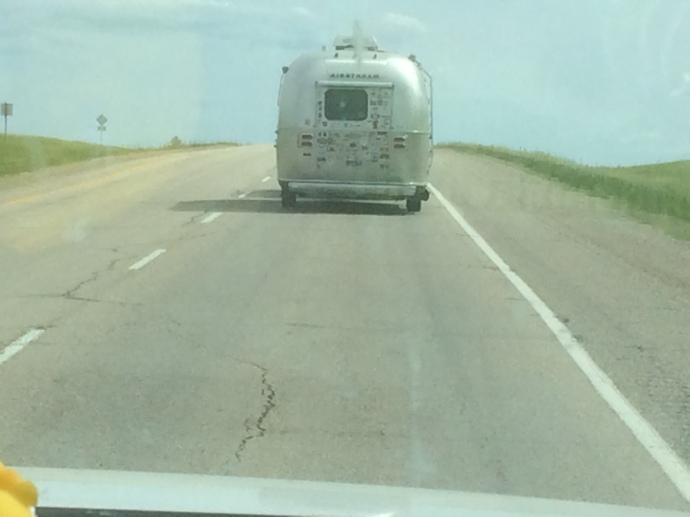 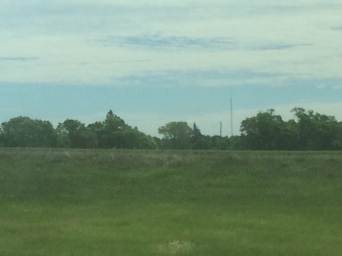 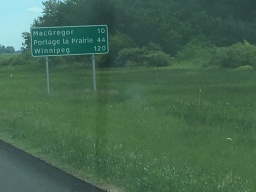 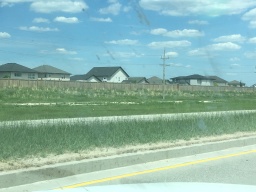 After a long day in the car, we were rewarded by the super campground at Whiteshell Provincial Park in Manitoba,  close to the border of Ontario.  It was a hot day and it was nice to cool off with a swim in Falcon Lake.

In the evening, I took a walk with Joka and Guy finished his painting “Prairie Dog”. 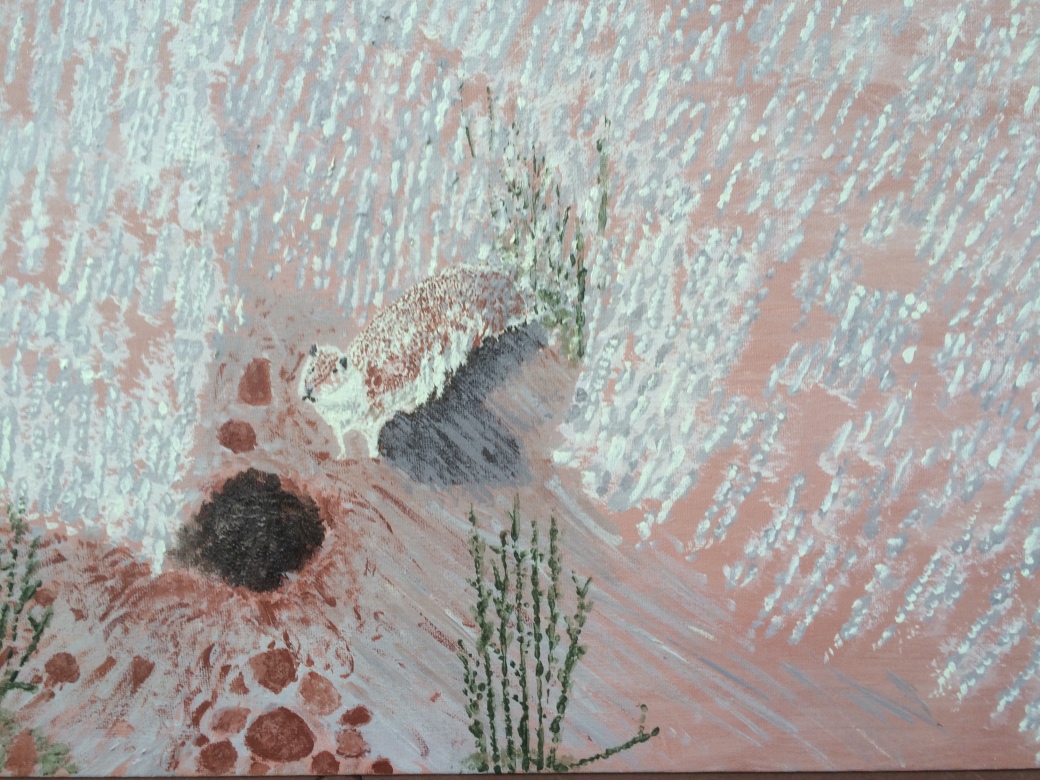 We left Whiteshell at a reasonable hour and made our way into Ontario through Kenora and Lake of the Woods country along Hwy 17. What a gorgeous, wooded, vast, lake-filled province Ontario is. We spent the night at Quetico Provincial Park on French Lake.  We had a beautiful campsite that night right on the shore.  I’ve included the bigger bottom photo because it has someone canoeing off in the distance.  Ontario is big on canoeing in their beautiful lake studded wilderness. 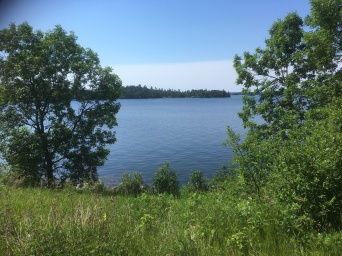 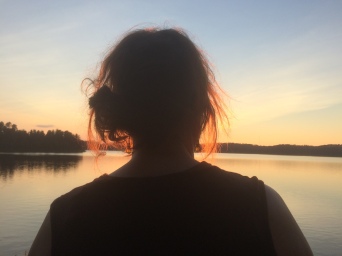 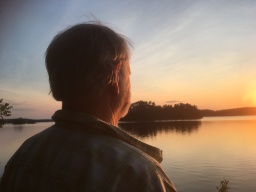 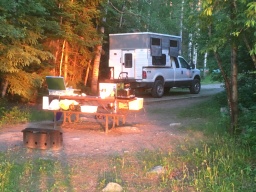 We set out in the direction of Thunder Bay that morning and stopped in at Kakabeka Falls, the 2nd highest falls in Ontario . You can guess what the 1st highest falls are.  They were well worth seeing.  We had a nice walk around the area to stretch our legs and then a quick picnic in the park there before continuing on. 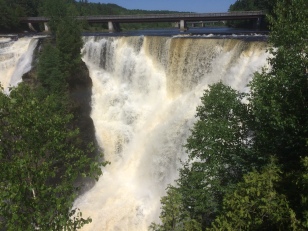 As we came down into Thunder Bay, we had the first peekaboo view of Lake Superior and it was so exciting. I felt the same way I did when I saw the Atlantic for the first time. After all those years of learning about it at school, and there it was, Lake Superior.  We stopped at a viewpoint passed Thunder Bay to look out across it as far as the eye could see. 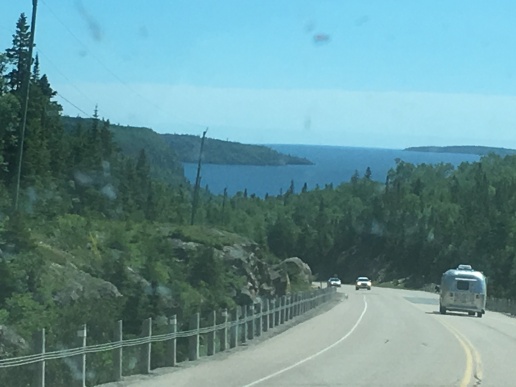 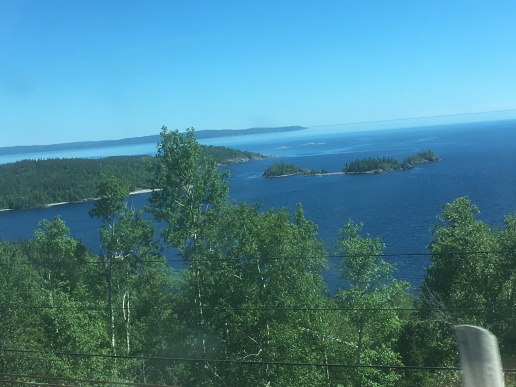 If you didn’t know it,  you would think you were looking at the ocean.  Lake Superior is massive.  It is the largest of the 5 Great Lakes in Canada.  It is 406.3 metres deep and  it’s surface area is 82,100 km² (31,700 sq miles).  It borders Ontario and Minnesota, Michigan and Wisconsin.   “It is generally considered the largest freshwater lake in the world by surface area. It is the world’s third-largest freshwater lake by volume and the largest by volume in North America”(Wikipedia).

At Neys campground, our tent site was just off the beach of Lake Superior.  As soon as we arrived, Guy and I went down to the beach to dip our toes in the water and then we had a nap on the sand in the sun.  Later,  Guy continued with painting “Contemplating Life”  based on a photo of me looking out to the water at Falcon Lake at Whiteshell Provincial Park. 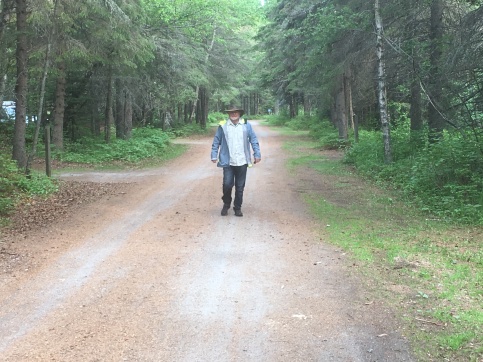 That evening, we had to put up the bug tent that Dude and Janet lent us. We are so grateful to have it.  It’s BUGMANIA or even BUGAGGEDON in Ontario.  The Bug Tent is our FRIEND!!! 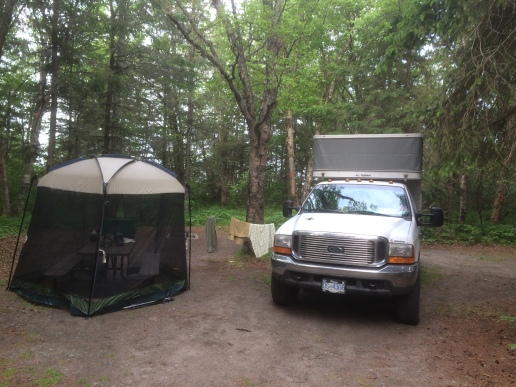 We slept in today and so had a late start and only did about 200k.  We arrived at Rabbit Blanket Lake Campground around 3pm.  I took a walk and worked on the blog and Guy finished his 8th painting.  Ta Da!!

Here are some pictures of the nature around the campsite and our travelling companion Joka out for a row. 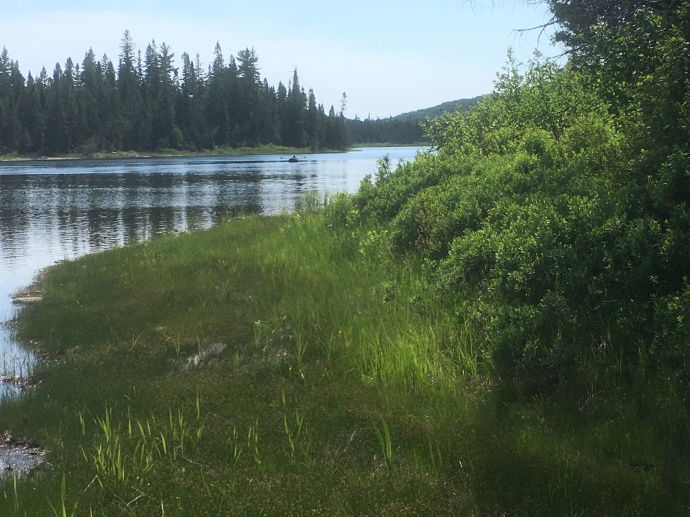 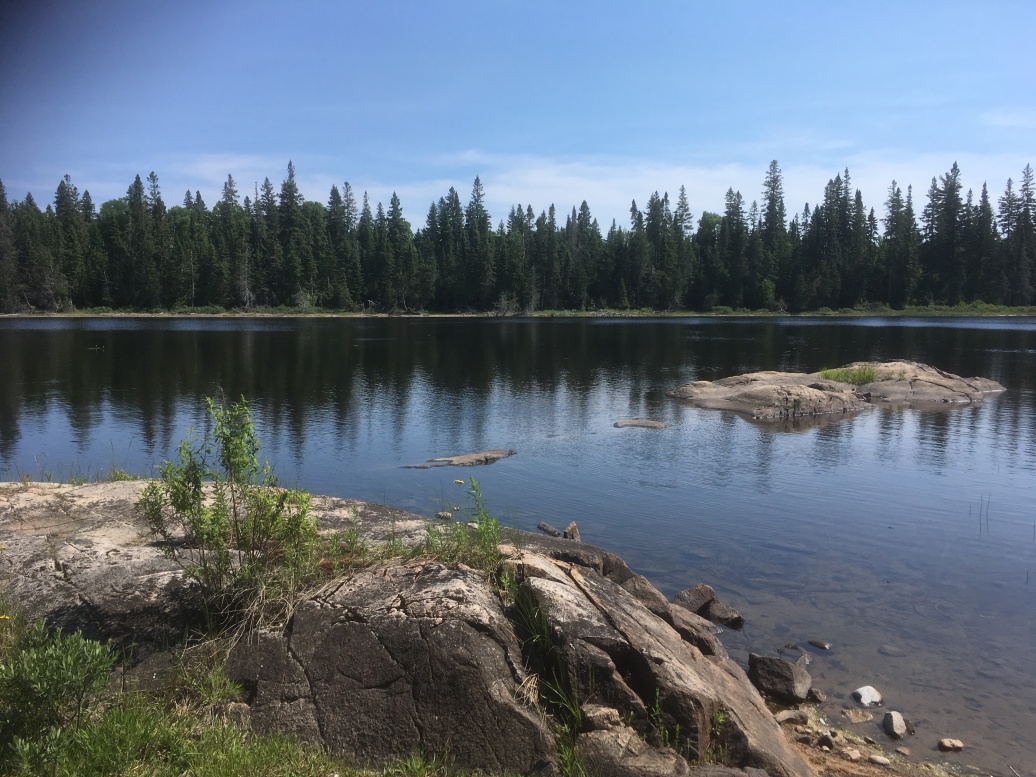 Tommorrow we say goodbye to our friend Lake Superior as we point ourselves in the direction of Stratford Ontario.  The theatre calls for our presence at next Wednesday’s evening performance of  Shakespeare’s “The Tempest”.  And I hope to run into my buddy Peter Mansbridge and maybe even the Biebs in Stratford.