On Saturday, we had just a couple of hours drive from Banff to Calgary.  It was absolutely pouring.

The mountains and jagged peaks around Canmore were breathtaking. We were just blown away by just how close these beauties are to Calgary.  You can just see the Three Sisters through the rain and mist. 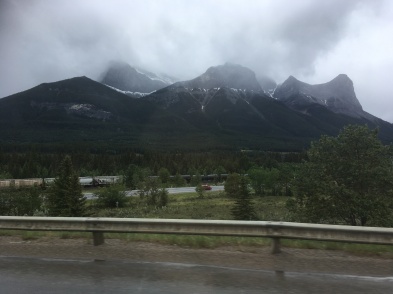 When we came down through the mountains into the foothills,  after spending a few days with mountains everywhere we looked, we were just shocked by how flat the landscape was.    It was as if the we had been sucked out of the vacuum of the mountains onto the flats and low rolling hills of the prairies. It left us breathless. 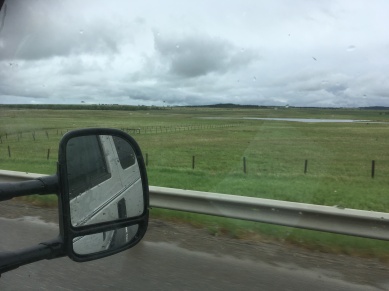 We spent the afternoon with our friends Phil and Heather.  After a  lovely lunch, we took  long walk along the  Weaselhead Trail in Glenmore Park, an inner city park, next to the Elbow River, with 26 miles of trails for walkers and cyclists.  It’s a gem for people of the area to get into nature near where they live.

We started off the day with a swim at the local pool just to soak out some of the aches and pains from sitting in the truck more than we are used to.  Then we went out with our friends and had a fabulous day seeing around Calgary.  Our excursion started out with a trip to the Regal Cat Café.

What a delight it was hanging out with the kitties and what a great cause it was.  The café helps the Meow Foundation which is a registered charity and  “humane society with a no-kill mandate. We rescue and facilitate the adoption of stray and abandoned cats into new, loving permanent homes”.  The café is a place where the cats can get exposure to potential owners and be adopted.  Awesome idea.  Hmm.  Business idea for the Sunshine Coast?

After saying goodbye to our new feline friends,  we caught a quick bite and then spent a few hours at the National Music Centre in the East Village of Calgary.  We loved this place.  The building is an architectural gem and is worth a look in and of itself. 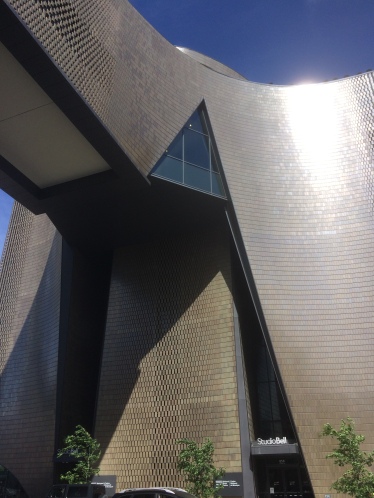 This is headquarters for Canadian music and goes back into the history of Canadian music, the contributions of Canadian instrument makers and restorers, has tributes to Canadian musicians, a Canadian Music Hall of Fame, as well as music artifacts including their acquisition of Elton John’s piano.  This is the simple piano that Elton  plonked out his first songs.  Its not Canadian but we own it. 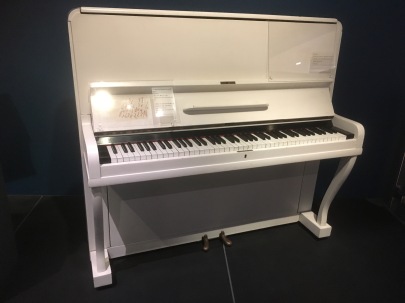 The centre was very educational and had many interactive places where you could noodle on an electric guitar, 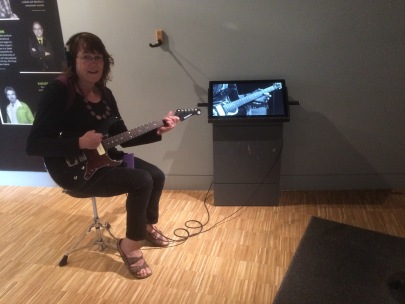 or wave your hands around and create music.  We took these surreal pictures of ourselves conducting.

We spent time in a recording studio singing, “la, la, la, la, la, la, la, la……..” from low to high to find out what our vocal ranges were.  Guy is a tenor and I am a Alto/Soprano.  We also had a chance to sing into a microphone like we were recording and listen back.  I sang “Taking Care of Business” by BTO.  It was a gas.

We bid our friends goodbye and Guy and I had a windy walk around downtown Calgary in the sunshine before we met my brother.  It was wonderful to see him after a few years.  I wasn’t short on tears. 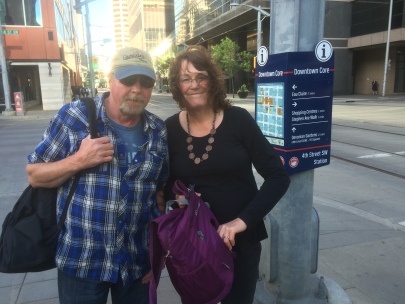 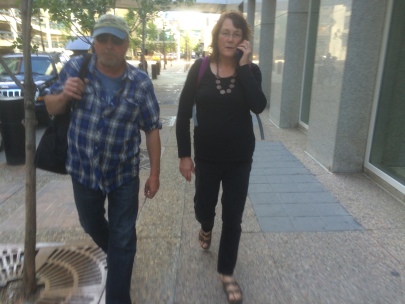 We shared a meal together and had a catch up before Guy and I caught the 69 train back to our friends house.

Thanks to our friend Phil, we had a great day out to Smashed in Head Buffalo Jump 500k south of Calgary.  It was a long drive there but incredible scenery with the green rolling hills.   You got a sense of the foothills and towering line of Rockies to the west and then the prairies to the east.

We saw lots of windmills. 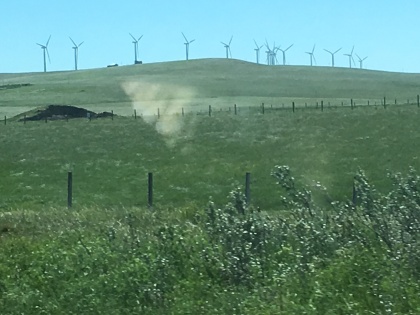 The Educational facility at Smashed In is highly recommended to anyone coming to Alberta.  We learned so much about the Blackfoot  and the buffalo jump that sustained the people of the plains for centuries. 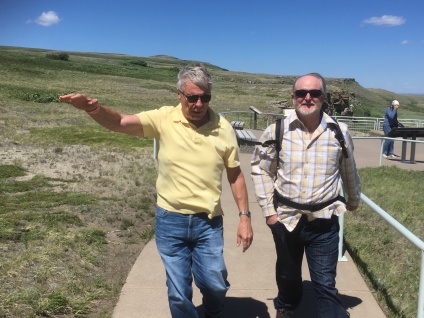